WIXOSS is a trading card game in which players battle against each other with fighters known as LRIGs (ルリグ, Rurigu, "girl" spelled backwards), using cards to support them. Certain LRIGs are able to communicate with their owners, and the girls chosen to wield them are known as "Selectors" (セレクター, Serekutā). Selectors are given the chance to have any wish granted by winning battles against other Selectors, but should they lose three times, their wish will be reversed into a curse instead.

The main selector anime series follows a girl named Ruko Kominato, who becomes a Selector after receiving an LRIG that she names Tama. As she and various other Selectors battle it out for the sake of their wish, Ruko finds herself drawn into the dark, sinister world of WIXOSS, discovering that, win or lose, there is always a price to pay. 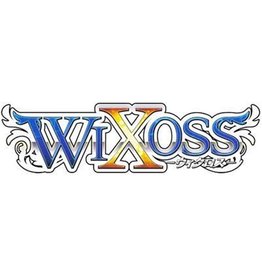